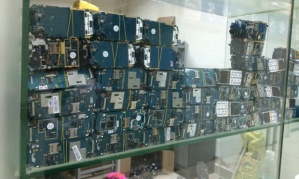 If you need a hard drive, they’re in plentiful supply. (c) Charles Arthur

Inside Shenzhen: China’s Silicon Valley: Just 30 years ago this Pearl River Delta megacity was a mere fishing village. Now home to up to 15 million people it hopes to become a tech nirvana for the world’s hardware startups (Guardian)

Huaqiangbei: the mega market with every smartphone part – in pictures: Huaqiangbei is a gigantic electronics parts market in the middle of Shenzhen, China. To explore it is to enter an Aladdin’s cave where almost everything you need to build a computer or smartphone – or 100 or 1,000 of them – is available (Guardian)

‘Super’ banana to face first human trial: A super-enriched banana genetically engineered to improve the lives of millions of people in Africa will soon have its first human trial, which will test its effect on vitamin A levels, Australian researchers said Monday. (Yahoo/AFP)

Sherlock lives in public domain, US court rules in case of the heckled brand: Judgement closes copyright loophole in US limiting right to bring detective back to life. (Guardian)

What If Billboards Advertised Art Instead Of Stuff You Don’t Need?: The largest outdoor art show that has ever happened will roll out across the United States this August. Watch for it, coming to a mall, roadside, or bus stop near you. (Co.Exist/Fast Company)

This Artist Is Filling In Chicago’s Potholes With Mosaics: If you can’t beat a bad pothole season, you might as well beautify it. (Co.Exist/Fast Company)

Two songs from Taeyang’s (amazing) new album, one of them featuring GD.