As longtime readers of my blog know, I watch a lot of kdramas and that I really love the crime-related ones. And some of you might know that I used to watch The X-Files a lot (I’ve seen the whole thing) and at one point, I wanted to be Scully. Some of you may also know that I am totally paranoid about infectious diseases and so on … which you would think means that I’m not interested in those things in fiction. But you’d be wrong. You see, there’s a very masochistic part of me who really, really loves that kind of stuff. Which, of course, brings us to the subject of this post.

Back in 2012, I watched (on the recommendation of a friend) a drama called King 2 Hearts. And while there was a lot about that drama that I liked, the main villain really stuck with me. His name was Kim Bong Gu and is played by Yoon Je Moon. It turns out that I’ve seen Yoon Je Moon in a bunch of stuff and really like him. So, in 2013, I was really excited to see that he was going to be in a medical-ish semi-crime drama called End of the World. I didn’t watch it back in 2013 for various reasons (including another, similarly themed kdrama called The Virus, which was excellent). But I recently found it with subtitles and decided to watch.

Going into End of the World, I knew of couple of things. Yoon Je Moon was the main character, the drama was about a virus possibly going to wipe out the world and it was originally 20 episodes but had been cut down to 12. What I didn’t know (and maybe I should’ve realized) was that the drama was going to be really, really bad. But not bad in the same way other shows are bad — the acting and the cinematography was fantastic and the plot had a lot of potential, but, um, the whole show was basically a mess.

If you want a positive review of the drama, check out Outside Seoul’s review, because this one isn’t going to be good.

As a crazy person who enjoys these virus-end-of-the-world movies/tv shows, I think my standards are probably too high, especially because I’ve read some books recently that do a fantastic job with the virus is going to kill everyone or make them nuts (or zombies) trope. I guess maybe I should blame Mira Grant’s Newsflesh trilogy (zombies) or her new Parasitology trilogy (the third one isn’t out yet) for basically killing it (in a good way). And therefore my expectations of what this show would be, along with how badass Yoon Je Moon was going to be, were, um, well, wrong.

I know, sometimes I need to just lower my expectations, but this was a Korean cable drama and the one’s I’ve seen have usually been excellent. But somewhere along the lines, End of the World went off the rails. Yoon Je Moon plays Kang Joo Hun, the director of a section of the Korean CDC’s infectious disease unit. He’s not a doctor (how is he director???) but he does a good job being their boss and he doesn’t take shit from anyone, or at least he tries not to.

The premise of this show is that there is a disease that is being spread, only the Korean CDC doesn’t want anyone to know even though people are getting sick/dying. And just like with Virus, there’s a carrier they have to find. Unlike Virus, the carrier figures out he’s making people sick and doesn’t seem to give a shit. There’s more to his character, but he’s so unsympathetic that I don’t care what happens to him. But ignoring that, the show had a lot going for it.

Kang Joo Hun has to butt heads with everyone above him in both the Korean CDC and the Korean government. In order to get stuff done, he has to find people who are on his side (and there are a few). His team has to go into dangerous situations and there’s always a risk that they’ll get sick. And then, slowly, things start to go completely nuts.

I was okay with members of the team getting sick, with miracle cures and government bureaucracy. But the active cover up but the government on this show and the possible implications of not caring if people get sick and die seemed kind of out there, but not enough to get me to quit watch. Granted, the show was only 12 episodes and I finished it, but still. 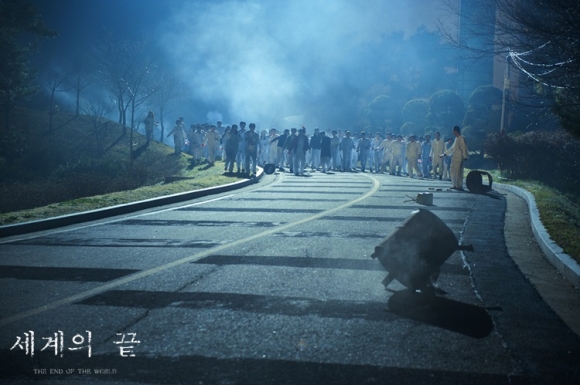 It was toward the end, when the infected victims were starting to go crazy that I was worried I was watching an accidental zombie show. I’m fine with zombies in movies, tv and books. But if I don’t know that I’m getting into zombies, then I’m not happy. The End of the World didn’t have zombies, but they weren’t not zombies, either. They were alive, but they were trying to infect other people because it wasn’t fair that they were sick and others weren’t (guys, you know that’s not how diseases work, right?).

Of course, there’s also a love story (wtf) that was nice and cute, but not overt, but also kind of unnecessary. I only liked it because it was a nice break from the rest of the nonsense. But then you have people going completely nuts and the hospital becomes a riot zone (wtf) and they have to get the spinal fluid (I think?) of one of the people because it will help them save lives and so the heroine is in the hospital when shit starts to go down and she can’t get out to deliver the cure, so she tries to make it work and then the hero decides to go in after because why the hell not?

So, he dresses up as a patient and sneaks through the rioting sick people and into the hospital. Which he succeeds in doing and then a bunch more unrealistic stuff happens and then they save the day. Because of course they save the day. There was a point, when I was watching this drama, that I really, really wanted the virus to win. I couldn’t figure out why I was still watching it (probably because it was only 12 episodes?) and I couldn’t stand seeing everyone survive. But of course that was never going to happen and because this drama is nuts, well, it remains nuts.

If you’re going to watch a kdrama about viruses, watch the Uhm Ki Joon-lead drama The Virus (which was on OCN, one of my favorite networks for kdramas). It’s better in pretty much every respect and while it’s only 10 episodes, it packs a bunch. Plus, Uhm Ki Joon is pretty great.