Yes, I like Taylor Swift and yes, I love this song.

A couple of these stories are from NPR and I would recommend listening to them (I tried to embed, but it didn’t work). If you can’t reading should be okay, but the actual audio versions of the stories are pretty good.

The first article, about anxiety, is especially good (in spite of being on Vice). As someone who suffers from anxiety (not as severe as the author of that column), I always find these articles equally useful and interesting — and I share them, both with my friends who have anxiety (aka most of them) and especially with people who don’t. Anxiety, if you don’t have, is very hard to understand. There are plenty of articles, cartoons/comics, and books that help. The author of that article actually mentions my favorite book about anxiety: My Age of Anxiety by Scott Stossel. I highly recommend it — I listened to the audio book version, but I’m pretty sure the print version would be good, too. You can get it wherever books are sold, but I’m pretty certain your local library has it.

Bonus link: Fear Of Fainting, Flight And Cheese: One Man’s ‘Age Of Anxiety’ (NPR) An interview with Scott Stossel. 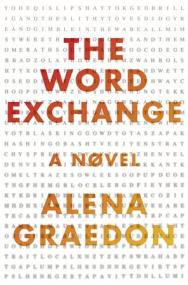 This book caused me quite a bit of trouble, ironically (I discovered upon reading it) because I kept misremembering and misreading the title as world exchange instead of word. I finally figured it out (actually, I went through the process of trying to remember the title a couple of times, two of them involving other librarians) and set about reading it.

The Word Exchange is a novel about the future, it’s a dystopia set in a world not far off from our own. In that world, devices reminiscent of today’s smartphones basically run people’s lives (predominately Americans, but other countries as well). These devices, called Memes, do everything smartphones do for us today — and then some. They can basically figure out what it is we need at any given moment, from directions to music to clothing. But, at the same time, they’re slowly replacing that which makes us who we are — our brains.

Of course, the majority of the characters in Graedon’s novel don’t realize this. How can they? They’re so attached (addicted) to their Memes that they don’t realize something’s gone wrong until it’s too late. The Word Exchange takes place right before the word flu strikes and society (at least temporarily) collapses.

The novel is told in the format of a transcript, complete with letters. Anana is writing her recollections of the events surrounding the word flu pandemic. Her chapters are separated by journal entries from a friend of her and her father, Bart. There’s some romance, Anana’s ex-boyfriend Max is partially responsible for the word flu’s spread, if not it’s creation. Bart himself is tangled up in the mess of the word flu and Max (they were friends, of a sort). 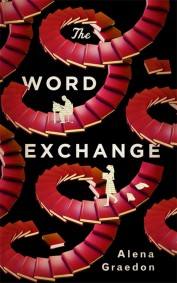 Each chapter is a letter and below the letter is a word beginning with that’s letter, followed by a definition. Anana, her father Doug, and Bart all work for something called The Dictionary. This is something similar to the OED, but in North America. Anana’s father is in charge of the rewrites for the 3rd edition. One day, not long after Max leaves Anana, she and her father are set to have dinner when he fails to show up. This sets in motion events that will change Anana’s life, at that of her family, friends and the whole of the globe.

Of course, Anana, like the readers, is unaware of what’s happening. But, of course, because the story we’re reading is Anana’s recollections, we also get the benefit of her hindsight. She  intersperses her story with insight (explaining things that she won’t know until later, among other things) that moves the story along in a very interesting way.

Both Bart and Anana catch the word flu, though the severity of their diseases vary. It’s through the disease, the word flu, that Graedon’s story is most effective. Anana recalls a moment on the train with her father when he uses what she calls an ‘obscure’ word and she pulls out her Meme (discretely, as her father doesn’t like them) which supplies her with the definition. And thus begins what I find to be quite terrifying.

You see, one of the ways the Memes worm their ways into the lives of the characters is by remembering things, remembering words, for us. You’ve been there. You’re staring at something (in the novel, it’s a fork, in real life it’s an armchair, a pen, a notebook, a lamp, anything ordinary) and suddenly you can’t remember the word for it. You know what it is, but you can’t come up with it. It’s happened to all of us. I blame our reliance on technology, the same way that Doug (Anana’s father) does with the Meme.

It’s through these devices, the Memes and others, that the virus spreads. The details of the virus, the impact it has on people and the delivery mechanisms, those are all  for you to discover when you read the book. There are, of course, bigger things at plan that just addiction to Memes and the fears of Doug and eventually Anana, too. But, really, at the heart of the novel is the importance of communication — what happens when we’re cut off? — and the written word — how do we communicate when you cannot speak?

Books, magazines, reading and writing, conversation and debate, all of these are important to the characters in the novel. But, really, I think that Graedon is trying to get across the idea that these are also important to us, today. Others may disagree, but I never really felt like she was trying to hit us over the head with the idea that these “ancient” technologies are any less important today than they were when, say, printing was invented. Perhaps some thing she’s being heavy handed, but I felt that wasn’t the case. If anything, it made me want to put down my phone and read more books.

So, if you’re looking for something that’s not quite science fiction, but not quite fiction, either. This straddles that boundary in an excellent fashion. It might slow to start, but it’s well worth the effort. And while the conclusion is rather open ended (I could see a sequel), I rather liked it’s conclusions (or lackthereof).

Over the past couple of weeks I’ve become a huge fan of the group SHINee (though I usually write it as Shinee), in spite of their company. It’s because their newest album, Odd, is fantastic. Hopefully by the time this posts, my copy of the physical album will have arrived. Anyway, here’s a live performance and the music video fro Shinee’s newest single off the album.

Looking for some romance for the beach? We’ve got you covered! Check out one of these titles books today. If you like these authors, stop by the reference desk for more recommendations and check out other books by the same authors!

For such a short book, it certainly took me a long time to listen to this. I think it’s not so much the book (though that’s part of it) but the fact that I’ve been listening to a lot more music recently. But, I finally finished Mort and while I enjoyed it, I’m not sure I liked it.

The story starts with Mort and his father at, well, a job fair. Of course no one picks Mort to be their apprentice, he’s a gangly, not-much-to-look-at boy. Eventually, after everyone’s left, it’s just Mort and his father, waiting around. And then, of course, Death shows up. Unlike in real life, most Pratchett fans are big fans of Death. He’s a truly great character and I’m looking forward to the other books where he’s a main character. Unfortunately, Mort is not one of the better Death offerings. That’s not to say that Death’s not great, there are just other things going against it.

As with all Discworld novels, there’s magic and magicians involved. But also some rather overt sexism, which is disappointing but not surprising. But more on that later. Where were we? Oh, yes. Death wants to take a holiday and decides to train an apprentice — Mort. Unfortunately for Mort, not only does no one remember his name (they all call him boy, much to his dismay), he has no idea what he’s getting into. Being Death is a whole lot of work.

The novel follows Mort’s (all too brief) training and then he’s set out on his own to gather the souls of three people who are set to die. Death, on the other hand, has embarked on his vacation (this, too, will not end well). I will give Mort credit, he gets the first two right. And then there’s the princess. On one of the training missions (I don’t know what else to call them), Mort and Death arrive at a castle to take the soul of a monarch. Mort makes a (one-sided) connection with the Princess and when he shows up again to collect her soul, well, you can imagine it doesn’t go well.

The idea is actually pretty interesting. What happens in the Discworld when someone who is supposed to die, doesn’t? Chaos, basically. The world tries to correct things and Mort tries to get in the way. In the end, of course, things work out and Death realizes he doesn’t really need an apprentice after all (and Mort finds that reaping his not his calling, either). 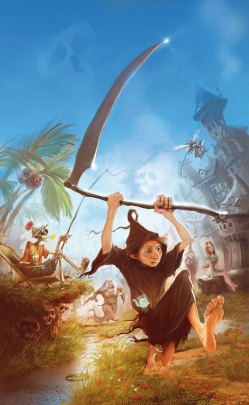 While Mort is wrecking havoc in space and time, Death is wrecking his own havoc. He’s eating and drinking, getting drunk and then, toward the end of the novel, he actually gets a job — as a cook! But as things are wont to do, they go awry and Death must swoop in to fix things, and he does, sort of.

But then there’s the sexism. The way Mort treats the princess, the way the wizard (who is kind of in love with the princess) treats the princess. And then you have Ysabell, Death’s adopted daughter. She’s described in rather annoying terms (and described as being rather annoying), but she turns out to be the best character in the novel. I like her because she’s got her head on right and she understands how the world works, while the men in her life (Mort, Death, and Albert, Death’s manservant and a former wizard) are basically bonkers.

I wanted to like this book more than I did. And while I did enjoy how Mort and Ysabell ended up together and it felt mostly natural, I was annoyed at how she’d been portrayed in the earlier portions of the novel. It’s been so long since I’ve read these books that I’m hopeful that the sexism decreases and my enjoyment increases. Though so far, all four of the Discworld novels are sexist, but I do acknowledge that and try not to let it color my view of the novels too much (Mort aside).

Did you read The Martian By Andy Weir (RO’s book review)? Did you know that they’re making a movie based on the novel? It comes out in October of this year.

Watch the trailer! Are you ready for the movie? We are! And while you’re waiting, check out some books about Mars!

A Clockwork Submarine
Create a free website or blog at WordPress.com.