I picked up Miss Peregrine’s Home for Peculiar Children because the sequel is coming out soon and I was curious. Before I started reading it, I asked if any of my colleagues had read it, most had not. But those few who had, said it was rather weird. I don’t really know what my expectations for this novel (which is often shelved in YA, but is perfectly at home in adult as well) were, but it wasn’t like anything I expected. Most of the novel is set in present day, but there’s some time travel involved (but I won’t tell you when, because that’ll spoil the surprise).

Miss Peregrine’s Home for Peculiar Children is the story of a teenage boy, Jacob Portman. He is the main character as well as the narrator, but he’s not the most important character in the novel. That honor goes to his grandfather Abe. We meet Abe just briefly in the beginning of novel, introducing us to a fantastical world of children who have strange powers. Jacob soon learns that this world is all in his grandfather’s head (it’s a world created to deal with his grandfather’s demons that came from escaping Poland and fighting Nazis). Of course, just when I was convinced this book wasn’t going anywhere exciting (or we were doomed to read about his grandfather’s life), everything changes — which in turn makes the book quite hard to put down.

Jacob’s grandfather is killed and he must come to terms with several things. The first, of course, is his sanity because he was there when his grandfather died, basically in his arms. The second (which is tied to the first) is the fact that everything he’s been told is a mixture of lies at the truth. The answers that Jacob seeks lead him to an island in Wales and this is where the real adventures begin.

I can understand where my colleagues who found the book weird were coming from — I was reading it at night and freaked myself out because it is rather scary (in a fun sort of way, though — at least somewhere in the middle, it gets dark near the end). But I’ve read much weirder (and scarier) stuff in the past. The book is illustrated with photographs (all of which are real and credited in the back of the book), such as the one to the right. Some of them are perfectly normal, some are slightly creepy (such as the two girls) and others are mildly disturbing — but all of them are equally important to the story itself.

Throughout the novel, Jacob talks about pictures he sees — and those are the photographs that are included in the novel. They play several important roles in the novel, as you’ll read. I like that Riggs included the photographs because they make the story more real (even as it’s a strongly paranormal and fantasy book) . I liked the characters, they were mostly well thought out and interesting, even the ones we end up hating. And while the most important character, Abe, is dead for most of the novel — his presence is always there. It’s what keeps Jacob going and what, in the end, informs many of his decisions. His relationship with his grandfather is a good, strong one, in spite of the adversity that kept them apart as Jacob grew up.

I also need to give Riggs credit for creating a rich, brash boy in Jacob and managing to make him exceptionally sympathetic. Jacob can be rich, spoiled and rude — but at the same time, he’s sensitive and caring (only he doesn’t always realize this). He’s an interesting main character and I like the way Riggs gives him depth, instead of letting his wealth define him.

Overall, I enjoyed the book a lot. It isn’t scary like a horror novel, but it is tense in all the right ways. It’s a good YA/adult crossover book that I think can be enjoyed by middle and high school students as well as adults of any age. Although I’ve labeled in paranormal and fantasy, it’s often shelved in regular fiction, so that makes it a good crossover book for people who aren’t into fantasy or paranormal novels.

A young(ish) coworker of mine suggested I might like (though she hadn’t read it) A Brief History of Montmaray. I was a little skeptical, mostly because I’ve long since outgrown my obsession with WWII fiction. There’s only so much depression that I can handle at a time. But the idea of this fictional island (Montmaray) between Spain and English and a book written in journal format was too appealing to resist. And I’m so very glad that I didn’t resist. The Montmaray Journals (by Michelle Cooper) consist of three books: A Brief History of Montmaray, The FitzOsbornes in Exile and The FitzOsbornes at War. Each of the books are written from Sophia’s point of view and we’re given a detailed account of her life. Sure, journals like these can be somewhat unbelievable (who really remembers their days in such detail), but I’m willing to give that a pass. Why? Because all three books are so engrossing and the characters are vivid and wonderful.

A Brief History of Montmaray begins with Sophia and the remnants of her family living in a falling down castle on Montmaray. Through the course of the book, Sophia, her older brother, younger sister and cousin must deal with and live through some strange circumstances. These include an attempt on the lives of several characters, Sophia’s love interest’s crazy mother, a crazy uncle, a daring rescue and, of course, Nazis. But really what makes  A Brief History of Montmaray so good is the fact that Cooper brings all of her characters, from the pets to the bad guys, to life.

The second book, The FitzOsbornes in Exile, focuses on our main characters once they’ve been exiled to mainland England. They’ve lost control of the island and, among other things, are trying to fight for control. A lot of people complained about the fact that Sophia’s journals tend to ignore or vaguely address the issues of the impending war, but I didn’t find it to be a problem. The reason is because these books are not expressly about the war. Instead, they’re about what it was like to be a teenager leading up to and during the second world war. It’s about fear of the unknown and how you cope with it. It’s about issues no one talks about and teenagers acting as adults. The FitzOsbornes in Exile also asks for a bit of suspension of disbelief  when Sophia must go before the League of Nations. But, to be honest, it doesn’t matter. The novel is less about war and politics then it is about growing up in a world where war can and does happen. It’s about being isolated (both male characters in the story are at school) and all alone and trying to stay in touch with the rest of the world.

I like the progression of the books along with the growth of all the characters. From Toby (Sophia’s brother) to Simon (his relationship with the family is complicated, but he’s Sophia’s former love interest) to Veronica (the cousin) to the tomboyish Henry (Sophia and Toby’s little sister). Not every series gets better or can manage such a fluid and believable growth within their cast of characters, but Cooper seems to bring everything together quite nicely. 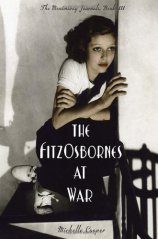 Which brings us to the third and final book in series, The FitzOsbornes at War. I could not wait to get my hands on a copy of this book. This final book brings the war to the forefront of the lives of our characters and becomes a character itself. Sophia is stuck in London and bombs are falling and the war is right there. This final book gives us a lot of conclusions and I’m being sparse on my review for fear of spoiling the experience of reading this final book. Sophia, Toby, Veronica and even Simon are catapulted into adulthood and into the war. People die in The FitzOsbornes at War, it’s full of heartache and tears. But it’s also full of love and joy. The FitzOsbornes at War also brings us full circle to the events of the first novel. We get the best kind of resolution and it’s satisfying, if not perfect (but then again, real life isn’t perfect, either).

These three books are intimately connected, as Cooper clearly intended them to be. The tension is different in each of the novels and ratchets up as the war builds and then explodes around our characters. The Montmaray Journals are journals, they’re coming of age stories and they’re about WWII. But they’re also so much more. They’re funny and sad, sweet and heartbreaking. And, unlike many series, they compliment each other perfectly and end exactly when they should.

Recommended? Yes. But they should be read in order. Also, I think if you want the best experience, I would suggest reading them as close together as possible. The stories will unfold in front of you almost as though you were watching a movie. These books are good for teeangers (most ages) as well as adults. You need not be interested in World War II to enjoy them. If you’re worried about historical inaccuracies, Cooper does a good job explaining at the end of at least one of the books what’s real and what isn’t. They might also be a good starting point to get teenagers interested in World War II. Overall, The Montmaray Journals are are well thought out and written trilogy that draw you in from the very beginning.